Mandala tattoos in Rome: they have a symbolic meaning related to the cosmos and consciousness, and help to achieve greater spiritual awareness.
The geometric shapes present within the mandala motifs and tattoos are a representation of the universe or patterns of nature.
The circle, a traditional element, represents the universe or the individual.
More concentric circles, symbolize higher levels of knowledge, with the center indicating perfection.
The center of the mandala, in fact, represents perfection or the center of the universe, and the culmination of the spiritual journey. 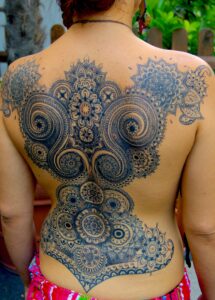 The square, on the other hand, in the mandala represents the earth and the worldly and material aspects.
The upward facing triangle is a symbol of masculinity and when combined with the downward facing triangle which symbolizes the feminine cosmic force, it means procreative energy.
Among Buddhist monks, it is used to draw intricate mandalas and then destroy them as a reminder of the transience of human life.

At the Tribal Tattoo Studio in Rome, Marco Manzo has been making mandala tattoos for many years and has been awarded in this style in numerous national and international conventions, and was mentioned by ELLE magazine in this article as one of the 10 best tattoo artists in the world specialized in this style. .