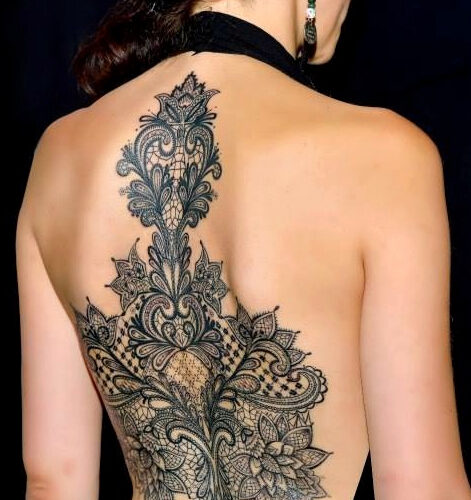 Marco Manzo is one of the best known tattoo artists in the world for the ornamental style that recalls fabrics, laces, dotwork, mandalas, gothic, chandeliers of the Victorian era.

The starting point is the client’s body to enhance her shapes and accentuate her femininity as if it were a permanent dress.

His tattoos are recognizable and immediately referrable to him.

After the numerous international conventions among the best known in the world in which he participated, winning 75 awards, Marco Manzo’s clientele has become international.

We receive many requests from abroad from people who, on the occasion of the tattoo, organize a trip to Italy to visit Rome, one of the most beautiful cities in the world.

The ornamental tattoos thus becomes an opportunity to visit the capital of Italy and bring with it an indelible memory. 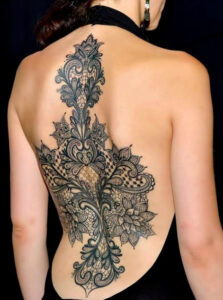 We are precursors of the feminine ornamental style thanks to the knowledge and awareness of multiple cultures, not with an imitative purpose but precisely because evolution and contrast are born from knowledge.

Each project is designed for every single person by Marco Manzo and Francesca Boni, creating works that have entered the world of high fashion and that have allowed the tattoo to be recognized as an art form, entering the collections of many museums of contemporary art.
There have been numerous performances where ornamental tattoos by Manzo were the protagonists: his clients were invited to participate, becoming haute couture models or protagonists of events such as the Venice Biennale, becoming witnesses of a change that has brought about the tattoo to be considered an art form.

Manzo has a deep passion for his work and considers himself a lucky man, as he does what he loves every day.

Or visit our gallery